django-pgpubsub: a distributed task processing framework for Django built on top of the Postgres NOTIFY/LISTEN protocol.

I have just released the first version of django-pgpubsub, a distributed task processing framework for Django built on top of the Postgres NOTIFY/LISTEN protocol. I’d be interested to hear any feedback anyone has 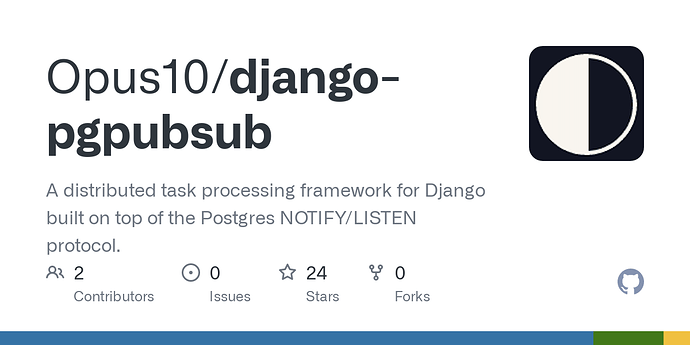 I’m always on the lookout for postgres-specific django functionaltiy.

How would this compare with, e.g.: Django-Postgres-Queue (GitHub - gavinwahl/django-postgres-queue: A task queue for django)

I’ll do some more digging but looks really nice. I’ll try and give it a whirl soon.

Thanks for putting it together!

Again, I haven’t used Django-Postgres-Queue, so it may have some features not present in django-pgpubsub. As with all open source software, users are encouraged to evaluate both and decide which is best for them

Please do let me know if you get a chance to try the library, I’d be interested in the feedback!