when I write to console py manage.py runserver
console returns python
and does not execute the command, maybe I don’t understand something, looking for help

It looks like you’re using Windows Powershell to try and do this, and it doesn’t appear as if you’ve either created or activated a virtual environment.

What steps have you taken before this point? What does py --version show? How about pip list?

<opinion>
You might want to either find a Windows Powershell-specific tutorial or possibly switch to the traditional Windows shell. I find the Windows command prompt to be more “familiar” when trying to use Python/Django than the Powershell.
</opinion>

About the best I can tell you is that those steps work for me.

What does the command py -m pip list show? 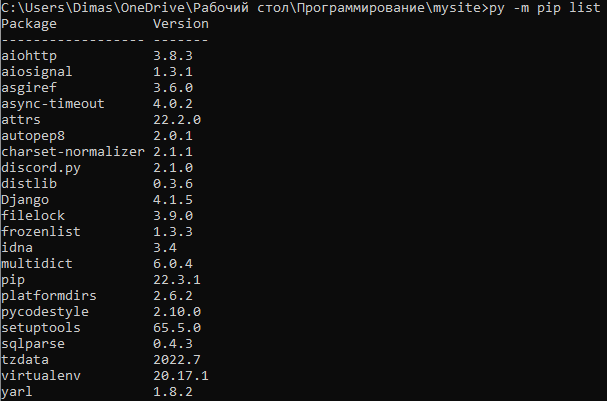 Ok, so this demonstrates a function Python and Django installation.

I’m guessing the next thing to try would be:
py manage.py
to see if you get the same output as the django-admin command.

If so, then try:
py manage.py check

Side Note: For future reference, please copy/paste text into your message rather than images. Use lines of three backtick - ` characters to force the forum software to keep it properly formatted. This means you’ll have a line of ```, then your code (or console output), then another line of ```.

Just as an experiment, try deleting that first line from this file.
(The line #!/usr/bin/env python)

I’m kind of able to recreate some of what you’re seeing - and it appears that it may be related to you not using a virtual environment here. (Pure conjecture at this point)

wow this helped solve the problem, thank you very much, but where did I get part of this code from?

It’s generated by the “startproject” command. I don’t understand why it seems to interfere with the py.exe command when you run it outside a venv - but that’s what appears to be happening.

(If you create a venv and activate it, then use it for your startproject, etc, everything appears to work properly. I’m only seeing this problem occur when there’s no active venv.)

Got it, thanks again for your time.