Unsure of how to contribute to issue 32819

Hello everyone,
I would like to contribute to this issue, and I can see that a pull request is already open. I’m not sure about what steps are remaining to close this issue. Could anyone help me get started?
@carltongibson - I would appreciate your input here

OK, so that was dependent on the Forms changes we got in for Django 4.1. It should be good to go now.

First thing is to checkout locally and rebase on main. Make sure the changes make sense, review the tests, update the release notes and version changed annotations for Django 4.2 (i.e. releases/4.2.txt not releases/4.1.txt) and go through the conversation to see if there were any other left over points.

Does that get you going?

@smithdc1 was working on this but I know he’d be happy for you to pick it up, and would likely offer a word of input if you open a fresh PR.

Yes, do feel free to pick this up, I’ve not got capacity to look at this any time soon but will be able to provide some comments and guidance.

I think the discussion on the pr will highlight the remaining issues to resolve, in particular this series of comments. Refs #32819 -- Added aria-describedby for help_text. by smithdc1 · Pull Request #15246 · django/django · GitHub. Likely that discussion can be continued on a fresh PR.

The first step I’m trying to do is checkout the PR locally.
I tried ~/django-repo (main) $ git fetch origin pull/15246/head:ticket_32819 and got
fatal: couldn't find remote ref pull/15246/head. I’m new to git and a little lost. I was following the directions here: Checking out pull requests locally - GitHub Docs

Is origin django/django or your fork?

How can I check this?

e.g. in my shell now for channels_redis:

You’re looking at the equivalent to this line to say django/django not nimra200/django`:

Have a read here: Git - Working with Remotes

You need to add django/django as a remote, and pull the PR branch from there. 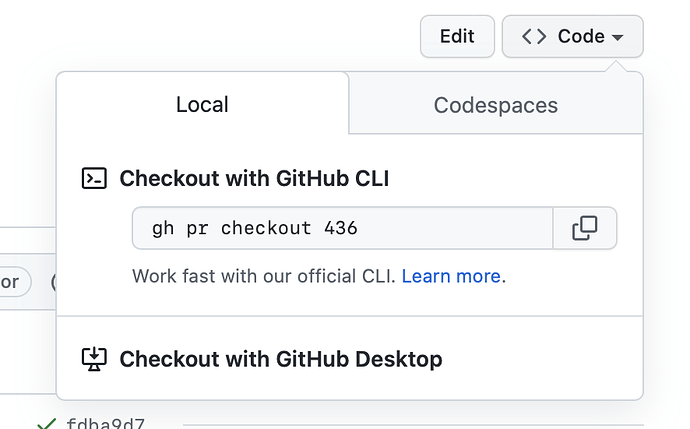 Hi Carlton,
Thanks. This is super cool and a feature I have not used. I will check it out.

Sorry, I hadn’t had a chance to look at this for a few days since we had a public holiday. I was able to checkout the PR locally with the github CLI!

Your best bet would be to google an article or two on rebasing here.

I recommend trying a GUI, which generally handle the nasty details for you.

I use Fork daily: https://git-fork.com/

When you say “update the release notes and version changed annotations for Django 4.2”, what do you mean?

Thanks for the suggestion! I ended up using sourcetree which was free to use

Similarly there are versionchanged annotations that need updating to 4.2.